How Eventing Started at Ballindenisk 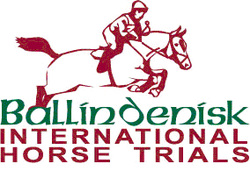 1977 Ballindenisk logo
In the spring of 1974, Norman Van de Vater (master of the United Fox Hounds) was out hunting one Wednesday, whilst galloping across Ballindenisk admiring the beautiful farm, looked at Robert (The Boss) Fell and asked

"Robert, would it be okay to bring a few friends for a gallop around your farm" - Van

"Of course it would" - Robert

Nothing more was said....

A few weeks later they were out hunting together again and Van looked at Robert and said..

"Robert you know this thing about my friends going for a gallop around your farm.... Well, could we put a red flag here and a white one there?" - Van

Robert thinking that this was very strange said...

Two weeks later the first Ballindenisk event happened.
The building of the cross country course was very different to what happens now. It was built at night with the aid of  tractor lights up to the night before the competition.

The first 3 day Event happened in October 1977 even bringing International riders. Here are some funny stories about the first 3 day in Ballindenisk.

Robert was asked to measure the cross country course but was never told how to do it, so he started at fence 1 and proceeded to wheel the course going in a straight line from fence to fence, so everyone got cricket time faults!!!!

When the first rider got to the D Box, he announced that nobody was to worry all the gates of phase A & C were now opened - Yogi Breisner (Yogi had opened all the gates, as someone forgot to open them...)

On the Sunday morning at 6 am a phone call came through to the house, to say that there was an urgent telegram in the post office for Ian Duncan...(in the lead going into show jumping)... So Ian's father jumped into his car in a mad panic to get the telegram, to find it was from Ian's girlfriend wishing him good luck... As you can imagine Ian's father was not too pleased about it.