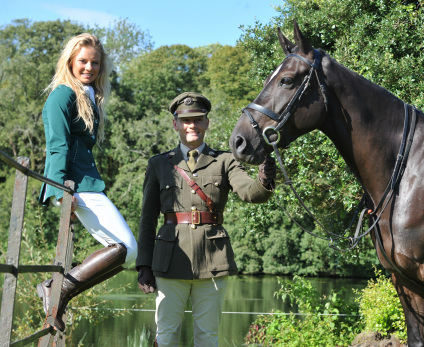 We are delighted to launch the Johnson & Perrott Land Rover International Horse Trials 2012.

This prestigious competition is at the top of the Irish eventing calendar and attracts some of the best riders in the world. Ballindenisk is gearing up to welcome competitors from Europe, the U.S.A., Australia and New Zealand, including most of the Irish Olympic team and Olympic silver medallists William Fox-Pitt (World No. 1) and Zara Phillips (former World and European Champion). With over 150 entries, this promises to be one of most exciting competitions yet at the Cork venue.

It is also the first step to one of the richest prizes in the sport. The €50,000 Goresbridge Go For Gold bonus prize will be awarded if the winning horse/rider combination of the CIC3* class goes on to win a CCI3* at Ballindenisk in 2013.

With trade stands, great food, Irish Pony Society showing classes, the thrills and spills of the biggest cross country track in Ireland, the excitement of the final showjumping phase and a ‘Mud Run’ for the energetic, over 8km of the cross country track, a great weekend for all the family is guaranteed!

For the perfect start to an amazing week of competition, Castlemartyr Resort will host a charity lunch in aid of the Jack and Jill Foundation on Tuesday, 11th September at 1pm. This will be followed by The Castlemartyr Challenge, a winner takes all €1,000 dressage competition for the top 3* competitors, which will take place on the lawn at this beautiful venue.

The six international classes at Ballindenisk are the Johnson and Perrott Land Rover CCI3* and CIC3*, the Mervue Equine Ireland CCI2*, the Castlemartyr Resort CIC2*, the Heineken CCI1* and the Bucas CCIJ1*. The national class is the Goresbridge Go For Gold Michael Leonard Championship for 5 and 6 year old horses.

Horse Sport Ireland Chairman Joe Walsh said: "The autumn event in at Ballindenisk was hugely successful in 2011, and I look forward to the event being even better in 2012."

Dressage takes place on Thursday 13th and Friday 14th September, with cross country on Saturday 15th and Showjumping, followed by prize giving on Sunday 16th. The Irish Pony Society showing classes and the ‘Mud Run’ will also take place on Sunday 16th. Information on the ‘Mud Run’ is available at www.ragerun.ie

Michael and Patricia Ryan, Bandon based husband wife team who have each represented Ireland at European Championships, World Championships and Olympics.

Joseph Murphy, County Down based Mullingar man, finished 14th at the London Olympics.